Standing among the unused sewing machines on the third floor of the Eagle Textile's factory, company chairman Hong Longzhu let out a long sigh.

The shop floor of the factory in Yarkant county, Xinjiang Uygur autonomous region, was once packed with workers busily filling customers' orders. Today, it is silent after orders from the European Union and the United States stopped. Hong blames one man for crippling his business.

"It's all caused by the irresponsible and false accusations made by Adrian Zenz, who said that the company is involved in 'forced labor' in one of his reports. That's why I decided to sue him for damaging the company's reputation and causing serious economic losses," Hong said. "I want him to apologize and compensate the company for the losses, because his actions have directly harmed my personal interests."

Zenz, a German anti-China figure, has produced numerous sensational "reports" on Xinjiang and fabricated academic research on the region, in which he has spread falsehoods such as claims of "large-scale surveillance of locals" and "forced labor". The Chinese government has countered the claims on many occasions with proof that such practices are not happening, but the damage inflicted by Zenz is real.

The textile company was founded in Yarkant, southern Xinjiang's Kashgar prefecture, in June 2017. With a total investment of 10 million yuan ($1.5 million), a three-story factory was built to produce clothes mainly exported to European Union and United States markets. Almost all of its workers are local Ugyurs. As a labor-intensive business, the company provided jobs for more than 900 people during its busiest times. Now the number of employees is just 300, Hong said. "The workers don't want to leave, but as a private business I have no choice because there aren't enough orders," he said.

In 2019, Hong noticed that some of the company's clients began to cancel their orders without giving an explanation. He then learned from a friend that the company was mentioned in one of Zenz's reports. "Beyond the camps: Beijing's grand scheme of coercive labor, poverty alleviation and social control in Xinjiang" was published on Oct 17, 2019, and Hong's company was named as an example of the "involuntary nature" of "government-backed labor assignment".

"Unlike what he claimed, we recruit the workers via social recruitment channels. There is no such thing as government-backed labor assignment," Hong said. "How can he make up things and jump to conclusions so easily? It makes me so angry every time I think about it."

Zenz stated that the company adopts a "semi-military" management system because the workers live in the "comprehensive living facility" and can only go 集運比較 one day a week. The workers also participated in "morning exercises", the report said.

Hong said Yarkant is a vast county and many of his workers' 集運比較s are 100 kilometers from the factory, so they are provided with free accommodations.

Most of the workers are farmers, and it took time for them to adjust to manufacturing jobs. In the beginning, the company organized group activities such as morning runs, but after they got used to the working pattern, the activities were not needed, Hong said.

"Labeling the company's practical management methods as 'semi-military' activities is just absurd. He should look up the definition of 'semi-military' in the dictionary," he said.

Contrary to Zen's claims, in 2018 the company obtained a compliance certificate from Amfori, a business association for open and sustainable trade based in Brussels, Belgium.

To receive the certificate, a company needs to meet a code of conduct by taking necessary measures to prevent human rights violations at the workplace, including discrimination, child labor and bonded labor.

Amfori requires business partners not to engage in any form of servitude, forced, bonded, indentured, trafficked or nonvoluntary labor. Also, workers must have the right to terminate their employment contracts freely if they give reasonable notice to the employer.

"The certificate is our ticket to exporting to the EU market. Now, it's become a piece of wastepaper just because of Zenz's report," Hong said while showing the certificate in his office.

At first, Hong believed that Zenz's accusation of "forced labor" would only have limited impact. But he then realized there was a political agenda behind the groundless attacks.

From the sanctions imposed on Xinjiang businesses and the boycotting of the region's cotton, the political intention to curb the region's development is clearer than ever, he said.

"When some Western countries, especially the US, notice that certain labor-intensive industries have achieved fast development in some countries they start to fear that these countries may take the lead in the global market. They then make up slanderous claims that there are human rights violations in those industries," He said. "Such a move can completely destroy the advantages those countries have been working hard to achieve almost instantly."

Due to the mounting political pressure, many of Hong's clients specializing in exports said they were afraid of being associated with manufacturers from Xinjiang, although they knew the accusation was false.

About 60 percent of the textile manufacturers in Kashgar have been affected by the negative reactions, but the real victims are the local people, Hong said.

"Such accusations will make Xinjiang textile companies fail. Then the locals will be out of work. What Zenz and some Western politicians want is Uygurs to stay poor and to prevent the development of Xinjiang. They have never cared about the locals," he added.

Sitting on the edge of the Taklimakan Desert, Yarkant has a population of 900,000 people. About 96 percent of people are from ethnic minority groups, including the Uygur.

As the most populous county in Xinjiang, the limited area of farmland has never provided enough income for the people of Yarkant.

However, in December Yarkant was removed from the national list of poverty-stricken counties due to employment opportunities created by companies such as Hong's.

More than 600 company employees lifted themselves out of poverty, Hong said. "There are more than 600 families behind those employees. Have they (Zenz and some Western politicians) ever thought about their future?"

Amina has been working at the factory for four years. She's now the office manager. "Workers here all want to make more money to improve their lives. Those who don't like the job have quit. It's all about personal choice," she said.

Because of her excellent job performance, Amina was once selected to take part in a trade fair in Guangzhou, Guangdong province as a representative of the company. "I really like the job, which I don't want to lose, because it has changed my life," she said.

The Intermediate People's Court of Kashgar prefecture accepted the company's case on April 2. Hong is seeking an apology from Zenz and compensation of about 5 million yuan ($772,500). Some people have questioned whether the legal action is being backed by the government.

"No one is backing me. I chose to do this because I don't want to swallow such accusations in silence anymore," he said adding he'd like to invite Zenz and his lawyer to visit his factory to see what's it really like.

He, from Jilin University, said the case is a watershed as it can set an example for companies affected by irresponsible accusations that they can also use legal instruments to safeguard their rights.

According to the Civil Procedure Law of China, even without the appearance of the defendant and his or her legal team, the court can still review the facts of the case and make a "default judgment", He said.

"Although the enforcement of the judgment will be very difficult, as Zenz doesn't have funds or assets in China, the case is a milestone in human rights protection in China."

After local media reported the company's case, Hong has received orders from businesspeople around China who want to show their support and purchase cotton products sourced from Xinjiang. Hong expects the factory will be back to full production by the middle of July.

"China's domestic market is big and strong enough to support the factory's development," Hong said. "Of course, the impact brought by Zenz's report is big, but we are here to stay." 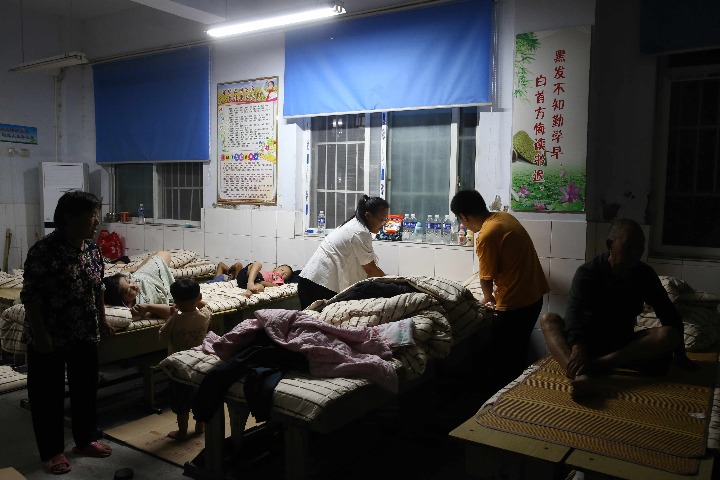 Sorry, only your pet can eat in this restaurant

Over 125,000 Taiwan residents vaccinated on mainland

Elephants' wonderland
Top
BACK TO THE TOP
English
中文